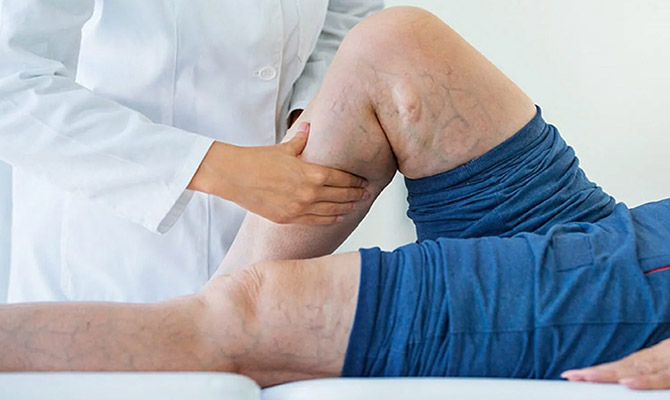 Deep venous thrombosis is the 3 most common cause of cardiovascular death, after heart attack and stroke. A 57-year-old gentleman was referred to SSB hospital with refractory gross swelling in both legs. Earlier patient was admitted in another hospital with chest pain, difficulty in breathing and fainting episodes where he was diagnosed with acute pulmonary embolism with IVC filter thrombosis and extensive deep venous thrombosis of both lower limbs. Thrombolysis with RTPA improved his breathlessness and chest pain but he continued to have gross swelling in both his legs and scrotum. At SSB hospital, he underwent CT angiography which revealed extensive thrombosis in infra renal IVC and in multiple veins of both his legs (bilateral internal iliac, external iliac, common femoral, superficial femoral and popliteal veins). A team of doctors lead by Dr. Gajender Goel, Senior Interventional Cardiologist at SSB hospital; used the novel mechanical aspiration Thrombectomy device called PENUMBRA through bilateral popliteal veins. As the thrombosis burden was very large, the procedure was repeated the next day as well. Along with this, catheter directed thrombolysis was given for 2 days. Use of this technique, enabled the doctors to clear out most of the thrombus from IVC as well as bilateral lower limbs. Within 5 days, patient's leg and scrotal swelling decreased remarkably and he was put on anticoagulant medicines to prevent recurrence. It has been more than 10 months since the procedure and the patient is doing well with no recurrence of deep venous thrombosis or swelling.