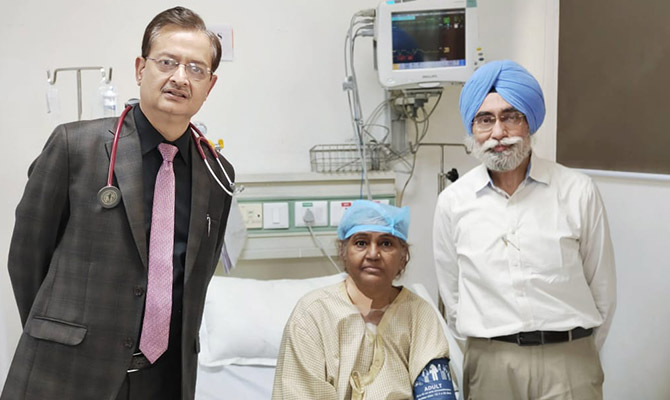 A hole in the septum which divide left and right chambers of heart occurring due to heart attack is a rare but life threatening condition. If not operated 94% patients die. Even in the best hands, surgery to close such holes due to heart attack in the heart can save only 53% of patients.

She continued to deteriorate even after procedure. Her BP on arrival to our hospital was very low.

2D Echo revealed a ventricular septal rupture with poor heart function. Patient’s relatives consulted Dr S.S. Bansal, senior interventional cardiologist for her further management. She was shifted to SSB Heart & Multispecialty Hospital, Faridabad on 22-06-2021 with a big hole in the septum of heart. This happened due to severe damage of septum as a result of heart attack.

Patient was stabilized by using Intra-Aortic Balloon pump called IABP. She had deteriorating Kidney functions so she was taken for emergency surgery. She underwent patch repair of large hole in septum due to heart attack and bypass surgery with balloon support by Dr Sidhu, Cardiac anaesthesiologist Dr Pankaj Ingole & Dr Neelam Aggarwal.

Post-operatively there was a gradual improvement in blood pressure. Patient was taken off ventilator and balloon pump on 3rd post-operative day. Patient recovered very fast after this emergency surgery.

In most cases of post MI VSD (ventricular septal defect) there is an immediate decline in blood pressure which usually leads to cardiogenic shock and death. Post heart attack VSD is a surgical emergency needing immediate surgical or device closure. This case signifies the role of team efforts, meticulous surgery and round the clock high end critical care.

Only a dedicated and motivated cardiac and cardiothoracic team can save such high risk patients, said Dr. S.S. Bansal.